Popular posts from this blog

- April 16, 2012
Would people queue for hours to panic buy pissing stamps. Only in Britain would the Post Office ration the number of stamps that people could buy. And only in Britain would the newspapers fill themselves up with full page stories about it for Christ's sake. "Colin, 34, from Basildon said he'd camped outside the Post Office in sub-zero temperatures all night just to buy two dozen first class stamps. I'd have bought more if they'd let me, he said defiantly." What a tosser, haven't these incredibly sad bastards got better things to do? These are the same arseholes that were stopping normal people getting petrol just a couple of weeks ago. "The car's full, but I've got six empty pickle jars and a couple of empty Sainsbury's bags here." Pooh count: two, just five minutes apart they were yet completely different colours and consistencies. Nature is truly amazing isn't it?
Read more 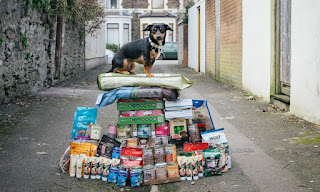 It would have been me Dad's 59th birthday today, God knows what he would have made of the current pile of shite we're all facing. No doubt he would have made some sarky comment about stockpiling toilet rolls. As he once wittily observed you could always use the Daily Mail instead . Just like war  - WAR! ... what is it good for? Nothing, absolutely nothing. NOT unless you count bashing the Labour Party for the last 100 years, and perpetuating the status quo. Mind you using the Mail would have blocked the khazi big style. So, he didn't really think that through - did he? I've got log cabin fever even more than usual now, with fuck all to do but wee on the floor, have a quick dump, dream about pigs ears. I can't even be arsed to swear much. Still; I've been careful keeping my paws to the ground, and putting ... ahem ... a few items aside for when the shit hits the fan. The keen eyed amongst you - which EXCLUDES Thomas Bell of Brigg obviously - will h
Read more